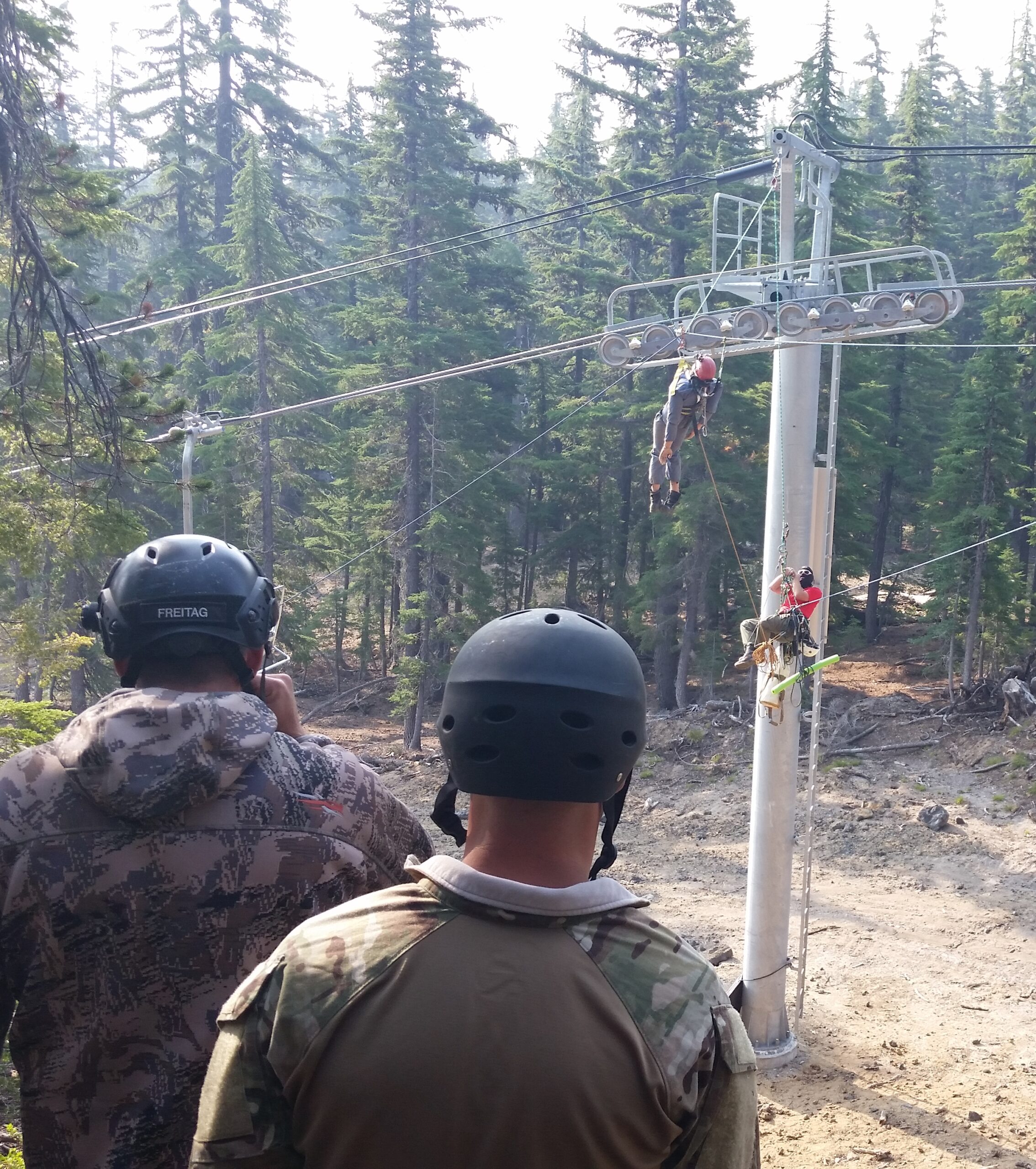 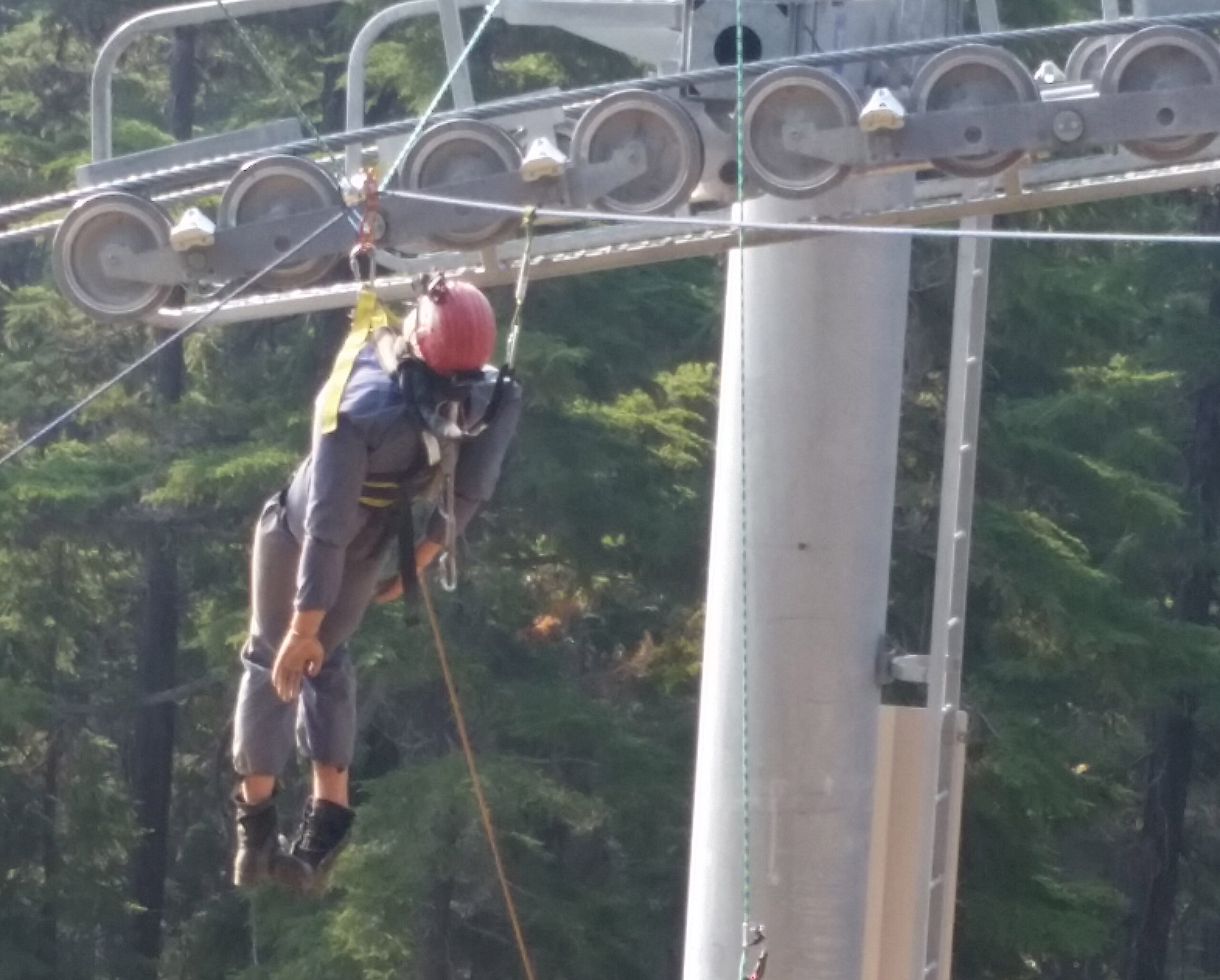 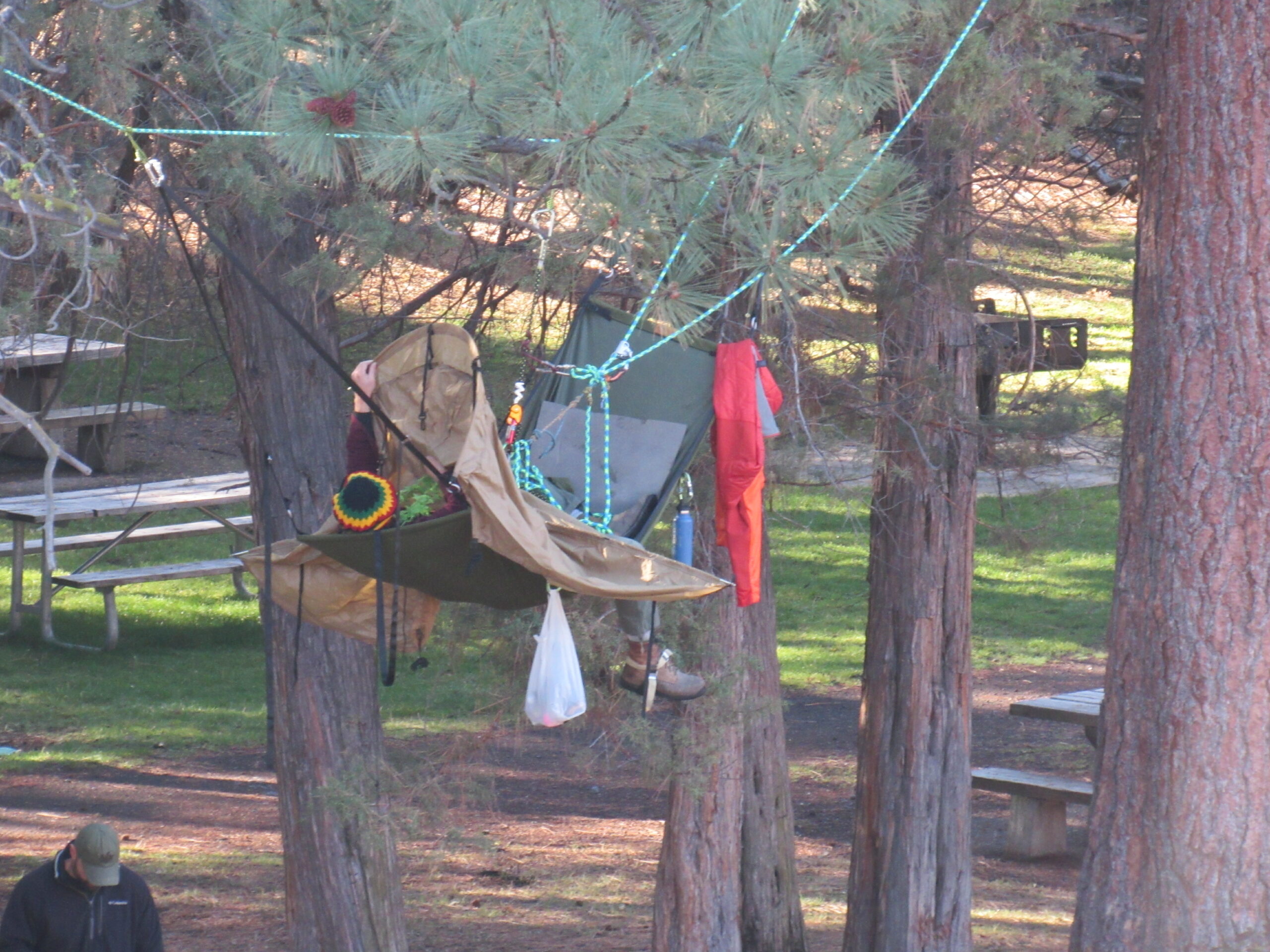 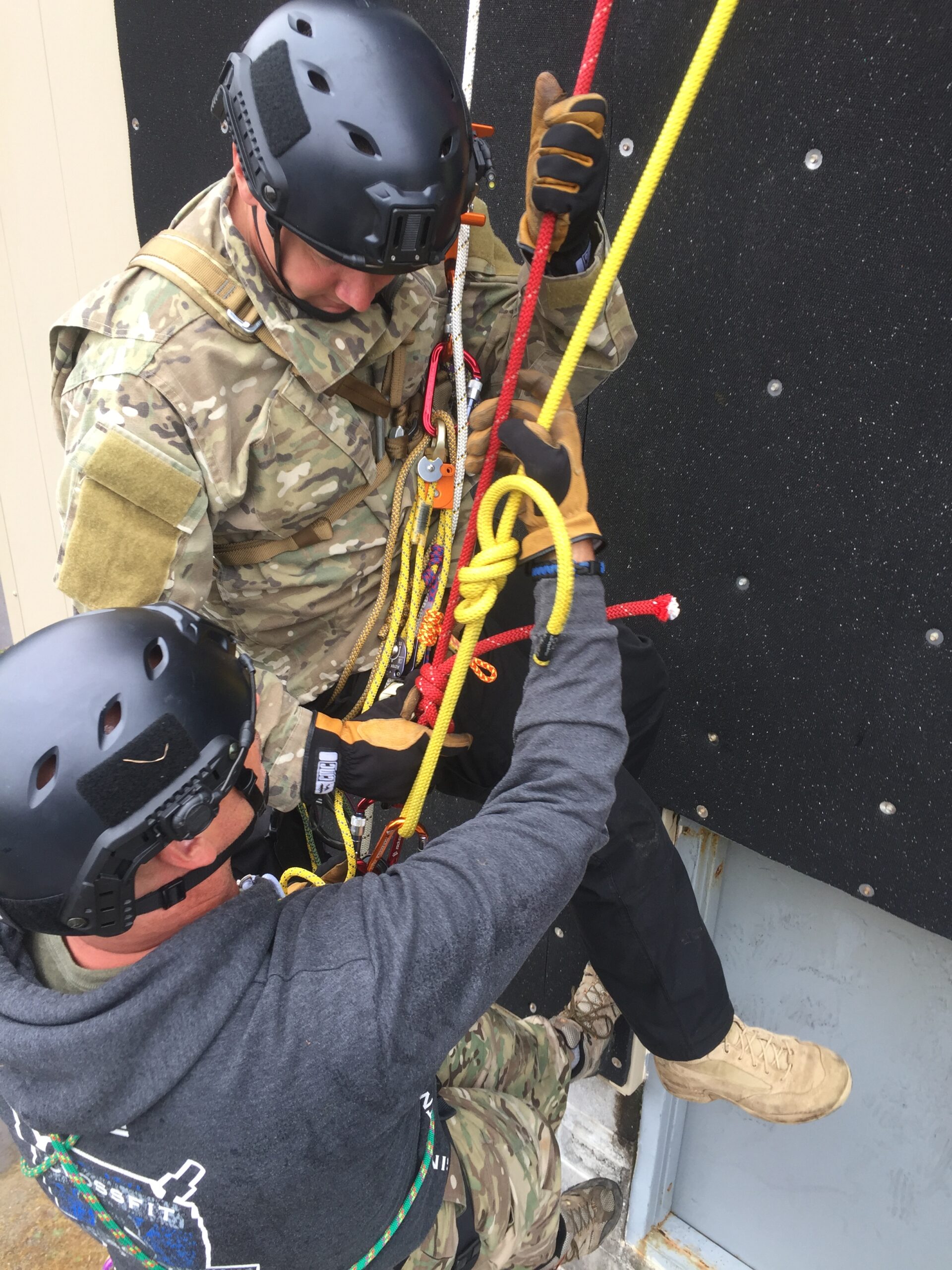 What makes rope work “tactical?” Many rescue organizations use this word for technical rope teams. For Vertically Speaking, “Tactical” means an environment that includes a hostile or antagonistic human element as part of the mission parameters, be it a protestor, criminal, armed subject, military opponent, law enforcement incursion, etc. It may also refer to the rescue of a fellow operator / officer in such an environment. It refers to law enforcement or military, who have to carry their tools of trade with them, whether they anticipate their imminent use or not. This means body armor, lethal weapons, restraint devices, intervention tools such as lock cutters and pry bars, intermediate weapons, radio, cameras to record the event for court or a command post, lights, NVG;s, and adherence to department equipment policy and a use of force policy...which can have VERY different limitations and triggers in a vertical environment!   Fire, rescue, and medical units who use this word for their rope work somewhat confuses things. They do not do tactical operations or rescues….they do technical ones. Yes, tactical also means pre-planning in anticipation of a reactive response, but in the rope world, and at Vertically Speaking, we try to keep this word clear.

“Operations” mean work. Doing your job. For wind turbine workers, it mean rope access. For arborists, it means accessing the limbs with your tools…chainsaw and handsaw. For police and military, it means accessing a site to contact a suspect, conduct surveillance, provide a distraction to facilitate an internal entry, gain entry unopposed, extract a hostage via vertical egress, intercept an active shooter, use ropes to access a criminal facility in the wilderness and exfil via a similar route, etc.   For wilderness tactical teams, it sometimes means using rope to cut sign via traversing terrain features and leap frogging ahead of suspects, approach armed criminal facilities in the back country via canyons and cliffs to recon for a subsequent assault, or deal with vertical protestors like tree sitters, logging operations aerial blockades with monopods, or bridge protests to stop shipping, etc. Tactical operations can range from high rise building entry, suicide bridge jumper interventions, to back country vertical or mountaineering operations, vertical protestors in trees or under bridges, to facility penetration, access for demolitions (sappers), etc.

“Rescue” means using rope to rescue someone on a vertical surface or suspended by rope, be it one of your own, a civilian, or a protestor or criminal, who is rope borne, that things went wrong for.

Each rope access industry has as part of its occupational operational training some element of rescue within their specific industry, where they expect to rescue their own. For example, arborists call this aerial rescue, which Vertically Speaking teaches in our tree operations program. Arborists expect / assume their rescue subject will be in a tree saddle and in an environment, they are familiar with. They expect to deal with idling chainsaws, climbing spurs, handsaws, moving rope systems, mechanical Prusik.

Rope access workers train to extract their coworkers, whom they expect to find wearing class 3 harnesses with ventral, sternal, and dorsal attachments, have 2 ropes and a fall arrest device like an ASAP, etc. Police should also have integrated into their “operations” how to conduct officer rescue who may be stuck on a rope due to user error or some action the suspect took, be it via weapons, or some kind of rope access nasty trick.

One critical factor in tactical rope operations is whether the opposition or target is (suspended) on rope / on a vertical surface, or flat footed. In most urban cases, even military, the opposition is usually flat footed and we use rope to maneuver in the Y axis to do our work and gain entry, access, observation, etc. This is the realm of “vertical mobility,” i.e. the ability to travel nylon cordage through any conceivable rigging arrangement. For protestors, suicide by jump calls, or officer rescue, the mark is in a vertical context…which is a whole different dimension of vertical “rescue operations.”…..or rather… “interventions.” Interventions involve integrating an operator’s system with a subject’s system or vertical situation...a much more committing situation demanding much more prowess than just traveling rope.

TACTICAL ROPE WORK IS IT OWN INDUSTRY AND VENUE!! It would not make sense to train a cave rescuer in a mountain rescue school, a fireman in a cave setting, or an arborist in a river or roof top. Yes, all the basic rigging physics and principles are the same, but the environment, tools, and conditions are very different. There is some overlap, but even the mental culture of the students is different. For most rope practitioners, gravity is your primary concern. When you introduce other environmental factors such as electricity, running chainsaws, or hostile suspects, this greatly aggravates the situation and the severity of any consequences. When tactical operators train ropes with industrial workers or fire service, the mindset of the course decouples the rope skills from the specific consequences the tactical practitioner will face, which is just training a mistake.

It is thus critical to have a full vertical rigging, mobility, and intervention program customized to the needs, environment, and use of force / departmental policies that govern every aspect of the operators actions. At Vertically Speaking we feel it is unwise to send tactical operators to conventional fire / rescue schools and then have the team try to “adapt” those skills to their environment and subsequently fit it into the departmental policies they operate under.

As such, Vertically Speaking offers a stand alone, three level core training program, for tactical officer operatons….as opposed to piggy backing on a catch all list of a tactical endorsements onto a conventional rope rescue qualification. We also offer an integrated course with aspects of all three levels as well as a basic Rappel Master course

As with all Vertically Speaking courses, content and techniques can be customized for the unique needs or environments of your team or unit.